Bringing together Biology, Climate Science, and Geology in the Galápagos

Bringing together a cross-disciplinary community of researchers to inform in novel and unexplored ways. 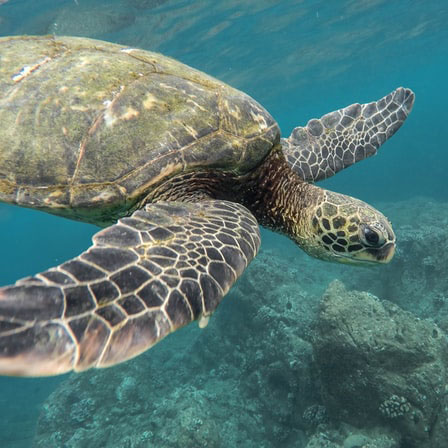 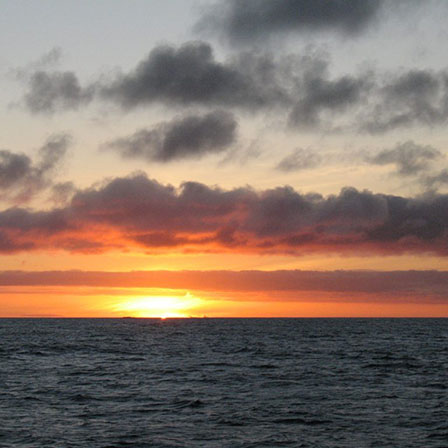 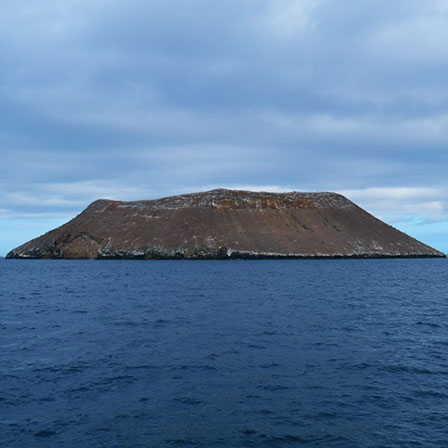 In island systems, many outstanding questions in geology, climatology, and biology can be successfully addressed with disciplinary-specific methods. However, fundamental questions often benefit from an interdisciplinary approach to create and validate testable hypotheses that would otherwise remain unconstrained or unexplored.

ISIC aims to bring together a cross-disciplinary community of researchers to determine the potential for geological, climatological, and biological studies to inform each other in novel, previously unexplored ways. To do so we will focus on the Galápagos Archipelago, an oceanic island system for which ample data have been assembled and that is ripe for more integrative cross-disciplinary analyses.

Specifically, this consortium will:

The Galápagos Archipelago is famous for evolution of species such as Darwin’s finches and giant tortoises. Underlying that unique diversity, however, are the geographic structure of the islands and the climatic environment that supports life. As a chronosequence of islands varying in size and isolation on a topographically complex submarine platform, the archipelago provides exceptional opportunities to explore research avenues connecting the disciplines of biology, climate science and geology to better understand island systems.

Much of what sets the Galápagos Archipelago apart is not the uniqueness of species occupying these isolated islands, but the simplicity of the system which makes it ideal for generating and testing hypotheses. Being so far from a mainland, colonization events are rare and thus radiations most often start from single founders that have diverged and speciated over time. With a moderate number of radiations of terrestrial and aquatic vertebrates and invertebrates on these small, desert islands in the middle of the ocean, it should be simple to reconstruct the past events leading to the diversity seen today, yet many questions remain due to uncertainty about the past environment that species evolved in.

With most islands now under the ocean or fully under the South American Tectonic Plate and a poor understanding of when climate events changed to support water-dependent life on these desert islands, biologists need to use multi-directional inference to create theories on the how, when, where, and why of species evolution in the Galápagos. Similarly, the geological template creates interactions between major currents and submarine topography producing upwelling that differentiates several biogeographic regions in the small geographic area of the islands and stimulates bottom up (nutrient driven) enrichment of marine populations and communities. This stimulated marine productivity likely transfers to terrestrial plant communities via sea bird and sea lion vectors, establishing potentially strong yet largely unstudied cross-ecosystem food webs. Considering that upwelling is reduced during El Niño and returns during La Niña, there is the potential to study how whole ecosystem shifts in the sea and on land are triggered by climate oscillations. Source-sink relationships, and dispersal mediated by wind and water transport can be predicted by climatological mechanisms, yet there is limited understanding of the connectivity that ensures linkages and the resilience of populations and communities across space. This contemporary metacommunity perspective is likely influenced by geological processes in Galápagos such as earthquakes and volcanism which create spatially complex habitats that may serve as biodiverse pockets for source populations and fragment the biotic and geological landscape.

The climate of the Galápagos Archipelago is highly sensitive to the coupled oceanic and atmospheric variability of the tropical Pacific Ocean. The seasonal cycle in the Galápagos consists of a warm and wet season from January to May and a cool and dry season from June to December, a result of the migration of the Intertropical Convergence Zone to the north of the islands and associated changes in southeasterly trade wind strength and oceanic upwelling. It is however, the interannual (2-7 year) El Niño-Southern Oscillation (ENSO) that dominates the spectrum of modern Galápagos climate variability. During an El Niño year, the islands can experience an order of magnitude increase in precipitation, along with much warmer ocean and air temperatures. Reduced upwelling undermines the marine food chain, impacting the foraging of birds and iguanas, as well as fish and marine mammals. Prolonged La Niña events, on the other hand, are associated with drought and cooler temperatures. Galápagos climate also varies on longer timescales, from decades to centuries to millennia. Paleoclimate records from Galápagos lakes, peatlands, and fossil corals, along with nearby marine sediments, are a key source of insight into this longer-term climate variability and its drivers. In addition, these paleoclimate records augment the short period of instrumental climate observations from the Galápagos, aiding in the detection of anthropogenic climate change.

The Galápagos islands also exhibit considerable spatial variability in climate across the archipelago. The northern islands (Wolf and Darwin) experience more tropical conditions – warmer and less variable ocean temperatures, for example – whereas the upwelling of the Equatorial Undercurrent in the western boundary brings strong seasonal cooling and high variability. In the vertical dimension, island topography defines wet and dry areas of the larger islands. The lowlands of the Galápagos islands, near the coasts, are notably arid, especially on the leeward side of the highlands. These highlands (≥~200 meters above sea level) penetrate an atmospheric inversion layer and stratocumulus cloud deck and are quite wet, with much higher relative humidity. The layer of stratocumulus clouds, or garúa, is an important characteristic of Galápagos climate, with significant control on ecosystems and freshwater availability (and human influence). Temporal changes in island geography and elevation can thus alter spatial gradients of Galápagos climate. Examples of this include the lower sea level of glacial periods which changed the archipelago’s geometry, and the uplift of the Galápagos platform and individual peaks over longer time scales. More recent intervals may have experienced ocean and atmospheric changes that could alter the spatial patterns of Galápagos climate, e.g. via changes in ocean circulation associated with ENSO or longer-term ocean-atmosphere modes.

The Galápagos Archipelago is a hotspot volcano chain created by eruption of lavas sourced from partially melted mantle rocks. These rocks partially melt as they decompress within an upwelling of anomalously buoyant mantle material beneath the islands (i.e., a mantle plume). The physical location and geometry of the mantle plume upwelling (and thus melting) is complicated by the Galápagos Spreading Center (GSC) located only ~200 km north of the Archipelago. The GSC is a mid-ocean ridge where two tectonic plates (Nazca and Cocos) spread apart forming new oceanic crust. Initially relatively warm, the newly formed crust and underlying mantle cool as they spread from the GSC, forming a sloped boundary capable of perturbing the flow of the mantle plume and altering the pattern of volcano formation and evolution. Such interactions between the tectonic plates, the GSC, and the upwelling mantle plume control the formation and history of the Galápagos Archipelago.

Despite the above general picture of the geologic processes at work to form the Archipelago, our understanding of the islands growth and distribution through time is vague. Geologic models for the formation and eventual subsidence of islands in the Galápagos rely on sparse age estimates from lava samples collected across the archipelago and basic models of plate dynamics. These data are challenging to interpret because ages often overlap and physical parameters (e.g., the elastic properties of the lithosphere) necessary for modeling are difficult to constrain due to lack of data, both from the islands and the submarine areas around them. Fortunately, a more robust and potentially accurate framework for understanding the dynamics of island formation in Galápagos could be generated by combining geological, biological, and climatological data.

Do you want to be listed as a Galápagos Network Member? 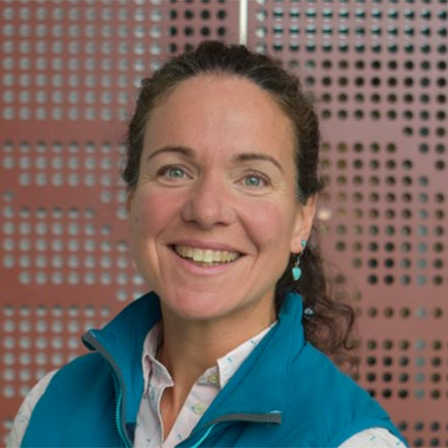 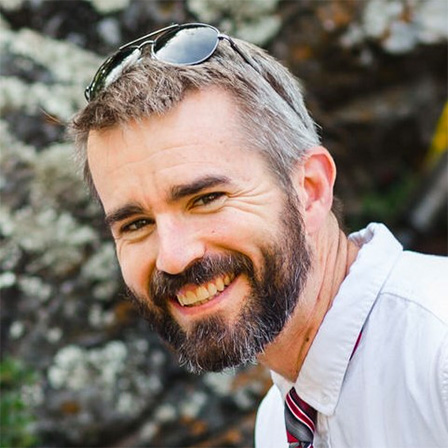 The goal of this project is to establish the Island Systems Integration Consortium Research Coordination Network (ISIC-RCN) and use the Galápagos Islands as a model system to leverage the power of cross-disciplinary research by connecting scientists from across geology, climatology, and biology. 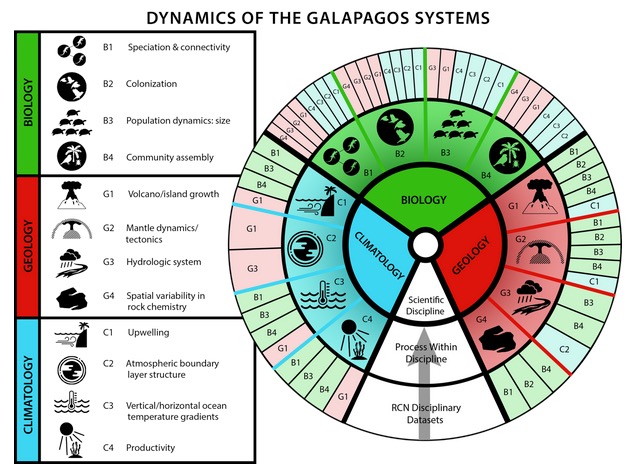 Schematic of envisioned cross-disciplinary collaboration that this RCN will enable. The gray arrow indicates the conceptual order of interpretations and hypotheses built upon existing data. Outer circle: Disciplinary datasets (as labeled) that inform interpretation and constrain hypotheses about relevant processes. These datasets are already created and can be used to inform new estimations. Central circle: processes within disciplines that benefit from constraining and informative interdisciplinary knowledge in the outer circle. All intra-discipline informative datasets (e.g., G1 and G3 inform G2) are not shown.

The Island Systems Integration Consortium (ISIC) RCN aims to bring together scientists from multiple fields to imagine and investigate questions of island evolution not answerable within single disciplines. We seek to create a network that is self-sustaining and constantly improving our ability to answer these questions into the future.

Researchers and educators working on Galapagos-related questions will form the ISIC community that will work to achieve several primary goals:

The dynamic nature of our planet has long been recognized by researchers in fields such as geology, climatology, and biology; and geological and climatological dynamics can have strong influences on the formation and maintenance of biological diversity.